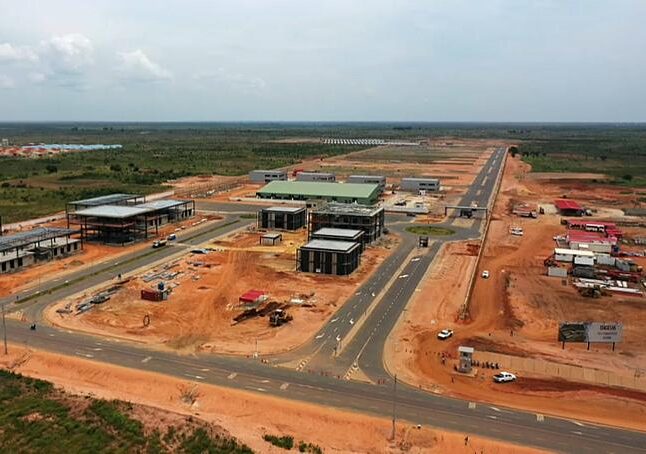 Located 4km from the city of Saurimo, the Saurimo Development Hub aims to significantly enhance the country’s diamond production capacity, enabling the processing and polishing of resources in addition to rough diamond exports. Recognized as the world’s sixth largest diamond producer and the third on the African continent, Angola is positioning itself as a world leader in diamond extraction, processing and production.

The Hub integrates all diamond industry actors – including both public and private sector players – under one development, anad will accelerate production and stimulate overall industry growth. In addition to the country’s existing four cutting factories, another four cutting factories are included in the development, significantly increasing domestic capacity. With an industrial area that comprises factories, processing facilities, and multi-sector offices, the Hub is committed to increasing cutting capacity from 2% to 20%, enhancing the country’s diamond value chain.

Meanwhile, in addition to the development of an industrial area, the Saurimo Diamond Development Hub comprises a commercial area with shops, restaurants, banks, office premises, a convention center, a professional technical school, a medical center and accommodation. Emphasizing the value of the diamond sub-sector as a catalyst for strong economic growth, Angola is ensuring the entire population benefits from the extraction and production of its resources.

Notwithstanding infrastructure developments, the Saurimo Development Hub will drive human capital development with the availability of education programs, technical sources, and professional training services for the local population. Overall, the development is expected to provide over 5,000 new jobs, significantly increasing the standard of living for the host community while enhancing local capacity building and skills.

With a focus on reducing illegal mining and increasing domestic production capacity, the new development hub demonstrates the value of sector integration in accelerating socio-economic growth, serving as a trend for other resource-rich countries in Africa.

In a bid to help attract investment into Angola’s energy industry, Energy Capital & Power will host the second edition of Angola Oil and Gas (AOG) 2021 conference in September 9-10 – an exclusive, transformative, and sector-advancing platform for networking, deal-making, and investment partnerships that will drive Angola’s energy sector growth and success – under the auspices of the Ministry of Mineral Resources, Oil and Gas.

The Role of Digitalization in Africa’s Energy Mix

A discussion held at the Cape VIII Summit in Luanda explored the pivotal role digitalization in enhancing Africa’s oil and gas market optimization.

Charné Hundermark is the Deputy Editor at Energy Capital & Power. She holds a Higher Certification in Professional Photography and an Honours degree in Media Theory and Practice. She is also currently completing her Masters in Media Studies.